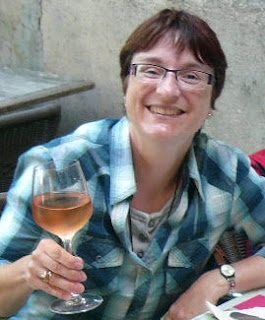 Karin Bachmann answers thirteen questions about her life as a writer
I’m proud to present a ”blog hop” with the Swiss writer, Karin Bachmann. Karin and I first met at the Swanwick Writers Summer School. We have been interviewing each other and posting the resulting conversations on our blogs. So have a look at Karin’s entry on http://stories47277.blogspot.com


The most important question first, Karin. When will your next book come out?
I'm re-writing a children's whodunit with the help of two Swanwick friends and hope to bring it out in time for the Swanwick Writers' Summer School in August. Although, if it goes on at the present pace, it will probably be Christmas before I finish. A crime anthology called "Mord in Switzerland" (Murder in Switzerland) containing stories by 18 Swiss writers, came out in February and is doing well. There are some big names in that book and I'm immensely proud to have been asked to participate. In November, a children's story is scheduled to appear in AQUILA CHILDREN'S MAGAZINE, an acclaimed UK publication for "smart children" (are there any others?).


Why did you begin to write? Was there a specific event that spurred you on?
I was lucky to grow up surrounded by books. My parents are both avid readers and they always read stories to us. I made up my first stories before I could read or write. So it came naturally to start writing them down as soon as I could. At first, they were microscopic ghost stories, but soon after having begun reading Enid Blyton, I wrote my own crime stories. When I was sixteen, Mother asked why I never tried to have anything published. I followed her advice and despite terrible research was lucky enough to find a publisher (SJW-Verlag, Zurich). I was hooked.


What genre do you write?
Usually, I write for the 8-12 children's market. Most of my stories are whodunits/ adventure. There's sometimes a historical element and I've tried writing fantasy, if with little success. I've been lucky with a few adult stories. Three have been published in anthologies (one in the UK, two in Switzerland) and I've had successes in competitions. Most notably a runner-up in the Writing Magazine "Jealousy" short story competition two years ago.


Which do you find more challenging, the process of thinking up a story or the editing?
I completely agree with the 1% inspiration, 99% perspiration theory. If a plot idea grabs me, I can come up with a viable first draft relatively quickly. Yet, as I'm hopeless at planning, it can happen that I have to go back and make earlier happenings in the story fit later ones. I don't like planning too much because I enjoy the characters taking over and surprising me. I always know where to begin and what the end should be like. The rest is navigating in the fog. (My love for that must come from having grown up in the "Bernese Seeland" in Switzerland, which is notorious for its fog.) Two thirds of the work is editing. Thanks to a former editor, who showed me the ropes, I actually enjoy it, although I still think I'm not very good at it. I'm prone to over-writing and then to cutting out too much. What shall I tell you? I'm still learning. Every day, with every text.


Do you have a favourite among your books and why?
With very few exceptions, it's always the latest story I like best. The characters are still with me and very much alive. The sense of accomplishment is fresh and strong. Finishing a story always feels like a victory. If I had to choose a specific story, it would be my second latest children's whodunit for the SJW-Verlag, Zurich, called "Die Zirkusaffäre" (The Circus Mystery). It's a good mix of crime, current issues and humour, and I think I got the editing just right with that one. I've also had great feedback.


How do you fit writing into your daily life?
It can be tricky. As an optician in my "bread-job", I work from 8.15am to 6.30pm. By the time I've come home, cooked dinner and cleaned-up, it's past eight and then I'm often too tired to write. Fortunately, I work only 80% , so I have Sundays, part of Mondays and Thursdays to write. I say part of Mondays because it's my cleaning day. I also teach some English (two to three lessons) and help my Granny with the heavy cleaning, which takes up almost two hours including getting there, back and showering. I use the lunch break on work days to do the shopping, chat a little on Twitter, have a look at Google+ and keep in touch with fellow bloggers. If there's time left, I also do my correspondence and – well – eat. On an ideal writing day, I get up at half past six, have breakfast and after having finished the household chores write for one and a half to two hours. Then I cook myself lunch (which is the main meal of the day in Switzerland). I write for about one and a half to three hours in the afternoon. Every now and again I get up to drink something and stretch because otherwise my back will give up on me. Ideally, I go Nordic Walking for an hour twice a week (although with this long winter, I've been a bit lazy with that). That all sounds incredibly disciplined and like a lot of finished work. But sometimes, on scrolling back over what I've achieved, I discover I've actually only completed two pages. I'm very good at procrastinating, too!


Should you ever consider changing genre, what would you like to write?
I'm a big history buff. Father told me about Greek Mythology and history in general long before I went to school. I loved those hours! And still today I find it hard not to watch documentaries on TV like "Living History" or "Terra X". Already now, there are historical elements in my stories; for example in my latest whodunit called "The Grandmaster's Sword" that's doing the rounds (for non-writers: I'm looking for a publisher or agent for it). The story plays partly in present day Malta, partly during its
past e.g. the Great Siege of 1565. So if I ever changed genre, the new one would be Historical.

Which of your senses is most likely to be involved when there’s a first spark of an idea?
I'm a notorious eavesdropper. I commute to work and, as I don't have a car, use public transport most of the time. The conversations around me are a treasure-trove of ideas. So, for the first spark of a story, I'd say hearing is most important. For writing the first draft, it's sight – or should I say inner-sight – as I imagine the story being played out in front of me and write down what I see.


Are there any writing related events that you go to?
Like you, David, I'm a fervent Swanwicker. A year without the Swanwick Writers' Summer School is not complete. I also try and go to readings and the AGMs and events of the writers' organisations I'm a member of. Apart from the fun, I usually pick up one or the other opportunity. My participating in "Mord in Switzerland", for instance, came as a result of visiting an exhibition on crime in Berne with a few crime writing friends.


Do you belong to any writing related organisations?
Apart from being a Swanwicker, I'm also a member of AdS (Authors of Switzerland, equivalent to the British SoA) www.a-d-s.ch , The Writers' association of Canton Bern BSV www.bsv-bern.ch and AUTILLUS, the Association of Children's Book Writers and Illustrators of Switzerland www.autillus.ch. For the latter, I have the honour of
working in the committee.


How can readers contact you?
I'm always happy to hear from readers via my blog http://stores47277.blogspot.com or my publishers SJW-Verlag, Zurich, www.sjw.ch and Appenzeler Verlag, Herisau,
www.appenzelerverlag.ch


How important is reader feedback to you?
Crucial! Without readers there wouldn't be any stories. That's why I love school readings so much. Children are a difficult audience. Adults will follow even the most boring performance because it's "good manners" to stay till the end. Children have no such qualms. They'll show you right away what they think and thus help you to become a better story teller. In the end, that's all I want to be – a story teller.


What’s your favourite book of all times?
That's a hard one! There are so many great books out there. But having to settle for one, it'll be Umberto Eco's "The Name of the Rose". It combines two of my passions: crime and history. It's written so well, it draws you into the middle ages within the first two pages and doesn't let you go until the very last one. The reader watches the happenings with growing outrage (being a child of the 20th or 21st century) and yet understands what drives the characters caught in the 14th.


Well, Karin, thank you so much for answering my questions. I’m very much looking forward to meeting you again in Swanwick this August.
Posted by Blog Master at 04:06